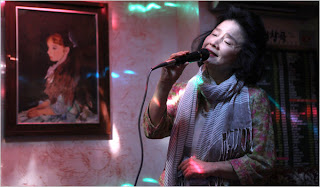 Great review by MANOHLA DARGIS in the New York Times today for Lee Chang-Dong's film "Poetry." Here is a clip from the review, "The film which won For Mija, a 66-year-old raising her only grandson, Wook (Lee David), in a cramped, cluttered apartment in an unnamed city, the pursuit of poetry becomes a pastime and then a passion and finally a means of transcendence. At first, though, it’s a pleasant distraction from an otherwise mundane existence, if also a way to exercise a mind that, as a doctor tells Mija early on, has begun to slip slowly away from her. Out of fear or confusion, she keeps the diagnosis to herself and almost from herself, telling neither Wook nor his mother, who lives in another city. Instead she dons the poet’s cap. “I do have a poet’s vein,” she says, chattering into her cellphone. 'I do like flowers and say odd things.'"

Lee Chang-dong has done an excellent job and the film is beautifully shot. The screen play is powerful and weaves poetry into the plot of a woman using art to navigate her decent into dementia. With the aging of the baby boomer generation we are at the start of a real challenge. This film will help to bring public awareness to the issues around how best serve and help people living with dementia. To see real life examples of people living with dementia responding to poetry go to:

We have had much success in performing and creating new poetry with people living with dementia. You may see programming in English, Cantonese, and Spanish, as well as a recent program where people were inspired by and wrote on bananas.
Posted by Gary Glazner at 7:05 AM