Confused the Hours by Huw Parsons 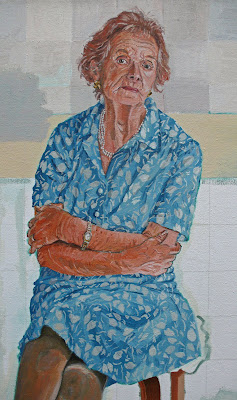 It’s seldom that I see her,
Except there in the mirror.
It’s then I glimpse the mysterious face,
Of that woman who’s taking over my place.

She stole money from my purse and more deceives,
Pulled the rug from my feet and lost the keys.
Such pure pandemonium and to make me a mockery,
Piles high the sink with my best broken crockery.

She eats my food, so I hide it in the shed
And leaves out in the rain almost every book I've read.
Much mayhem, mischief and misunderstanding,
In all of which this witch has had a hand in.

Every night as I sleep she's standing by the bed,
So such vivid dreams they flicker through my head -
Whilst downstairs an army of furniture removers,
Shifts the heavy sofa through some tight manoeuvres.

She’s touched the clocks, confused the hours
And tampered with the fairest flowers.
So my roses ‘Peace’ and ‘Ena Harkness,’
Now in the garden bloom in darkness.

And like a full moon she can curdle fresh milk
And is even stranger than the shore of Acker Bilk.
To her ailments she’s a martyr, quite the little Joan of Arc,
So I search the drawers for tinder and some means to make a spark!

Proud to start the New Year with this poem and painting honoring his mother Marjorie Parsons by the Welsh artist and writer Huw Parsons. Not only is Parsons a talented poet and painter, he also embarks on delightful poetry projects like "chalking up" poems all over the town of Brecon.

For More info on the poetry and painting of Huw Parsons and to see images of his poetry projects click here.

Huw Parsons was born in 1954 and grew up in Llyswen, a village some ten miles or so west of Hay on Wye. He was educated at Brecon Boys’ Grammar School and Chelsea College of Art. He’s worked as a painter, filmmaker, lecturer, antique dealer, watch repairer and an author and photographer.

In many ways Huw is neither ‘fish nor fowl.’ As a border person he thinks of himself as being neither wholly English nor particularly Welsh and because of his life’s diversity has become a social impostor and a cultural chameleon. As for writing he believes that he’s no particular gift, except for having a dogged determination, combined with being observant, having a good ear and an ability to write in simple, descriptive English. His literary influences include the poems of John Betjeman and Phillip Larkin, the novels of Leslie Thomas and the song lyrics of Sting and Jake Thackray.
Posted by Gary Glazner at 7:40 AM