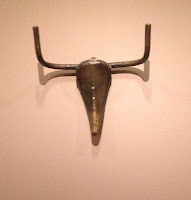 I recently visited the Picasso Sculpture exhibit at MoMA, that the NY Times calls “a once-in-a-lifetime exhibition that brings together more than 100 Picasso works, including many never seen in the United States."

Seeing the way he used found objects to create a number of the sculptures, made me think that how we create poems in the Alzheimer's Poetry Project (APP) could be described as "Found Poetry."

Here is a guide to the exhibit that gives examples of how Picasso used found objects.

Wikipedia defines, "Found poetry as a type of poetry created by taking words, phrases, and sometimes whole passages from other sources and reframing them as poetry (a literary equivalent of a collage) by making changes in spacing and lines, or by adding or deleting text, thus imparting new meaning."

The main technique we use with APP to create poems is by asking open-ended questions around a theme. For example at the John Michael Kohler Art Center in Wisconsin with a group from the Gathering Place, we created the poem "Ocean." The poem was inspired by Tristin Lowe's artwork of a life-sized whale, "Mocha Dick." We asked what the ocean would smell, taste, look, sound, and feel like. We imagined encounters with whales. We wrote down all the comments from the group, taking care to transcribe as close to the actual words as possible and then we shaped that text into a poem.

We started the session by performing: "Catch a Little Rhyme," by Eve Merriam; "Whopper!" by Jack Prelutsky; "The Whale," by Hilaire Belloc and sections of "The World below the Brine," by Walt Whitman; and "Moby Dick," by Herman Melville. These poems also helped to inspire our original poem.

When we perform the newly created poem with it's "found" text we use a "call and response," technique to perform the poem with the group and improvise, thinking of the lines in a similar way to how jazz musicians interpret a melody, changing among other elements, the tone, rhythm, and speed of the recitation. We are always being open to the group adding new lines, as you see at the end of the poem, with the improvisation on whale, pail and ale.

Another artist we draw inspiration from is Robert Rauschenberg’s work with Combines. This mixing of media and breaking down of boundaries between painting and sculpture also guides our work in partnering with assisted living, adult day care, senior centers and cultural organizations including museums, to provide programming for their clients, we have a group of ready, willing and able people who respond strongly to the opportunity to express their creativity, with the goal of giving voice to people living with memory loss. 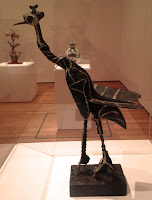 Mocha Dick, which appears in the video courtesy of the artist in collaboration with the Fabric Workshop, The West Collection, and Fleisher/Ollman Gallery, PA and John Michael Kohler Art Center. Mocha Dick is the real life whale that Melville based "Moby Dick," on.

Special thanks to Margaret Groff, Education Program Manager at JMKAC and Cindy Musial, past Director at The Gathering Place for setting up the workshop.