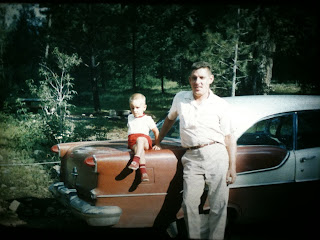 Our father died yesterday at 2am. His obituary is below. On Christmas day when he was in the hospital I asked him if he wanted me to read him a poem and he asked for the one about "Okies."
I read it to him and he grinned and said "pretty good." Below is Maps and Wings written for my father. I will be writing more about him and his and my mother's connection to the Alzheimer's Poetry Project over the next few days. Gary Mex Glazner
Maps and Wings
The road looks the same
no matter where you are going.
Route 66 was my father’s road
and his father’s road.
Model A with the dust bowl
in the rear view mirror
and California in the headlights.
From being men to being Okies.
The vulgarities of newcomers.
A drowsy distant hope.
Route 66 was their plowshare.
They dug into the rank soil.
Held the miles in rusted fingers.
Maps folded like wings.
A banquet of motion.
Beckoning us now
with its broken fragments.
Let us piece the road together.
This is the way they went
and we shall follow them as we are able.
Billy Mex Glazner was born in Blair, Oklahoma on July 31st, 1930. His childhood sweetheart and wife of 47 years, Frankie Lou Glazner preceded him in death.

As a boy he worked picking cotton and experienced the Great Depression and the Dust Bowl. Like the characters described in John Steinbeck’s novel, “The Grapes of Wrath,” his family traveled from Oklahoma to California in search of work, where his father Mex found employment as an electrician on the Irvine Ranch. Billy’s middle name comes from the state of New Mexico where his grandfather worked on the railroad near Santa Fe. He was so enchanted by the land; he named his son after the state, who then passed it to his son and on to me as a family name.
Everyone who knew Billy Mex remarked on his sense of humor and storytelling ability. Perhaps those talents had their origins in the fact his parents not only showed creativity with their unusual choice of a middle name, but in the fact that the given name on his birth certificate is Billy, not William.
He served in the Korean War as an artillery gunner. In 1957, he joined the U.S. Border Patrol in Sierra Blanca, Texas. He was promoted and transferred to work as an investigator in the Immigration and Naturalization Service (INS) in New York City in 1960. His 23-year career in law enforcement culminated in San Francisco as the Assistant Deputy Director, Investigations, INS in 1980.
Upon his retirement in 1980 from the INS, he supported his wife in the purchase of Novato Florist and they worked together until their retirement in 1991. It takes a man secure in his masculinity to go from carrying a snub-nose, 38-caliber pistol in a shoulder holster and supervising INS agents to running a flower shop.
Recently he developed a passion for bowling and belonged to the Sons in Retirement Bowling League.
His 1948, Blair Broncos high school yearbook lists his favorite food as: corn bread, molasses, and sassafras tea; his subject as Frankie; his song as “Cigarettes, Whiskey, and Wild, Wild, Women,” and his pastime as sleeping. His sister Ann reported that their mother Minnie was scandalized upon hearing these favorites
read aloud at his high school graduation and said, "He never drank sassafras tea."

He succumbed to cancer of the liver on December 30th, 2001. Billy Mex is survived by: his wife Ann; sisters, Sue and Ann; sons, Gary Mex, Kevin and Lon; their wives Margaret, Alma, and Jennifer, and grandchildren Jennifer, Emily, Frank, Beckett and Ruby. A memorial service will be held at the Presbyterian Chapel, 710 Wilson Ave. Novato, California, Sunday Jan 2nd, 2011 at 2pm.
Posted by Gary Glazner at 10:52 AM