Poetry for Life!
Do you know any kids or elders or cats or anyone really, stuck in the safety of their home? Please join poet Gary Glazner at 10:30am EDT each day, Monday through Friday, through April 10th
Call (339) 209-6482
Poetry for Life is a 15-minute long show that sounds like an old-fashioned radio show. Suitable for all ages! Funny Poems! Happy Poems! Poems that make you want to Dance. Love Poems! Silly Poems! Won’t you listen in and take a chance?
Contact poet Gary Glazner for more info at: garyglaznerpoet@gmail.com
Depending on the length of the PAUSE Quarantine and level of interest we may extend programing beyond the end date of April 10th.
Posted by Gary Glazner at 10:28 AM

I carry this luggage with me

I carry this luggage with me
- Norbert Góra

On the way from life
to death,
I carry this luggage
with me,
it gets heavier
with each passing year,
even short moments
want to put something in it.

I have children’s tears
packed there,
sleepless nights interrupted by
silent sobbing,
I have all the loves
that have gone away somewhere,
a bear and a bull market,
knowing that it was hard.

This luggage
is memories,
added to life for free,

I’m going ahead,
the next episode of my life,
I carry this luggage with me
to feel the magic of memories
again.

This poem comes to us from Poland.
The poet is Norbert Góra,
a former care assistant.

One of the highlights of working on the APP is the people you get to work with. With all the dozens, if not hundreds of people, I have had the pleasure of working with, the only mother and daughter team we have had is Cari Griffo (to the far left in orange) and Willa Edwards (in the front in blue). Here they are with a group of poets in Albuquerque performing as a poetry chorus. 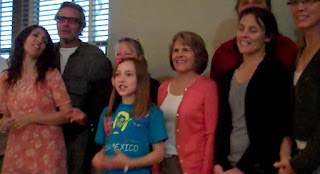 Also, pictured is Willa's dad and Cari's husband the artist Trent Edwards (to the far left). I know these long term friends not only through poetry and art, but Cari was also for many years my dental hygienist.

She has recently written and interesting essay on the connect between Gingivalis and Alzheimer's disease. The piece included a great story about Cari and Willa's time working with the APP. 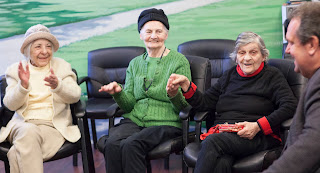 JAMA: The Journal of the American Medical Association, a peer-reviewed medical journal published my article, on performing and creating poetry with people living with dementia. Co-author Dan Kaplan, PhD and I are thrilled! It is the most in-depth description of my theory of what is happening at the neurological level, when you are performing poetry using call and response.

The paper is a call for further research and ends with, “Reciting poetry is unlikely to change the progression of dementia, but it can help change the narrative of how unaffected individuals and society perceive dementia. Changing that narrative to include examples of creativity and moments of joy, and the tantalizing possibility that it can positively affect the consolidation of new short-term memories into long-term memories, alters the perception of dementia from an experience defined by isolation and lost personhood to one of social vitality and enduring personhood. This shift may help combat the stigma of memory loss and promote more humane and effective care environments and therapeutic strategies for working with these patients.

Here is a link to the JAMA essay

Creativity in Elder Care
Training Medical Students in the Use of Creative Expression to Improve Elder Care
"The poem springs from the half-spoken words of such patients as the physician sees from day to day… This, in the end, comes perhaps to be the occupation of the physician after a lifetime of careful listening." -William Carlos Williams


We are excited to announce that in July 2016, we launched the The Art and Medicine Program at the University Of Arizona College Of Medicine – Phoenix and the Alzheimer’s Poetry Project (APP), based in Brooklyn, New York, provided a series of participatory arts training workshops for medical students to use creativity with elder patients. We developed a medical student curriculum entitled, “Creativity in Elder Care,” for the Art in Medicine program. The program is now in its third year.


The workshops were co-taught by Gary Glazner, founder and Executive Director of the APP, and Cynthia A. Standley, PhD, professor in the Department of Bioethics and Medical Humanism at the University of Arizona College of Medicine – Phoenix.

Autumn in LA doesn’t make sense,
shouldn’t even be a song.
I wouldn’t even give it a second thought
It starts on Christmas day
You know what I mean. I’d be a fool to run there.
Autumn in Brooklyn, leaves falling. They do.
Autumn in Vermont, a slight mist,
tramping through the forest
Autumn in LA sounds like fun and laughter
A cacophony of horns on the 405
Doesn’t sound different than any other month
Smells like smog The kids go off to school. And we’re free!
The leaves change colors in autumn
in New York, weather cooling down
We don’t have that here
But the coloring of my liquidambar trees
And there’s a fragrance to it. Autumn.
There’s a street that has a tunnel of trees
They all turn, it’s a very pretty street
Nobody can afford to live on it
but it’s a very pretty street


Created by poet Sarah Jacobus, with the poets at OPICA. Sarah writes about the process, "I chose an autumn theme for today, despite the fact that it’s over 90 degrees here. I gave each participant a little pumpkin to hold, feel, smell. We did call and response with the first verse of James Whitcomb Riley’s The Frost is on the Punkin and made some vigorous kyoucks and gobbles and clucks. A woman in the group started humming Turkey in the Straw, and we realized we could sing the poem to that tune. So we did. Then we listened to Sarah Vaughan’s arrangement of Autumn in New York and talked about songs as poems." 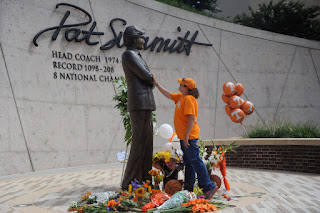