Fredrick Kunkle of the Washington Post asks, "Can Alzheimer’s be treated with the arts? Researchers aim to determine the answer." 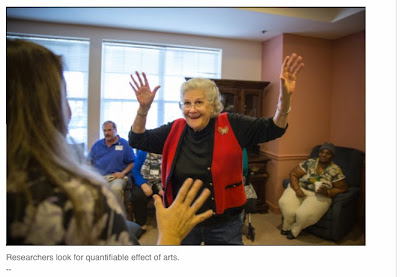 The National Endowment for the Arts and the National Institutes of Health and others are pushing for more answers. At Birmingham Green, researchers from George Mason University are conducting a federally subsidized study to examine the impact of the arts on the emotional and cognitive health of older adults.

“There still needs to be a lot of work done,” said Sunil Iyengar, who heads the Office of Research and Analysis at the NEA. Iyengar said research into the effect of art on people with cognitive impairments has suffered from a lack of rigor.

Too many studies lacked proper controls, involved samples that were too small, and were poorly defined. They also may have been looking for the wrong thing, Iyengar said. While searching for hard evidence of biological improvements in memory or cognition, many also overlooked measurable improvements in the mood and well-being of people with Alzheimer’s, and their caregivers, too.

I am thrilled to be included in the article:


“But outside of these things is sheer joy,” said Gary Glazner, founder and executive director of the Alzheimer’s Poetry Project. Glazner said he was working at an adult day-care center in Northern California and searching for ways to connect with people with Alzheimer’s disease when he discovered the power of poetry to reach people with cognitive impairment.

Having studied poetry in college, Glazner shared Henry Wadsworth Longfellow’s poem “The Arrow and The Song” with a resident and from the first line — “I shot an arrow” — hit the mark. Glazner uses poetry, particularly beloved classics learned by older adults, in call-and-response with older people and guides them in writing poems. Jump-rope rhymes, even military cadences, can evoke responses from people with cognitive impairment that engage them, he said.