I don’t like silence,
I like this.
Have the children been out today?
I love silence.
The orchid is lavender,
like the shirt of the aide.
Beautiful sounds –
I have a stack of cd’s and books,
I have nothing else.
Love makes a house a home.
I have loved
every person I have ever known.
It never goes away –
I never lose any of it.
The woman who screams under water
is in a lot of pain,
but not above the water.
If you wanted to join the Red Cross
you had to swim many laps
to prove your endurance.
I am a person who needs
a lot of time – I am a Buddhist
and I got this out of it.
The love is impressed through every letter.
One thing that could not be taken away:
imagination.
Could you close the window? –
I’m cold.
I want to be out of here.

Silence in the Storm

Silence can say more than speaking.
It can be more intense
and safer.
My godfather was an evangelist.
He used to say: that’s another star in your crown.
My mother once told me
to go to her bedroom,
but don’t touch the brush,
lay down on your stomach
and don’t move.
What crimes do three-year olds make?
None.
In a sports game I expect
to be bounced around like a ball.
Shoes used to be filled with straw for warmth.
A black orchid keeps Brenda Star alive.
Sometime’s silence is not enough.
Either the poet was battered,
or he did the battering.
I used to dream so often,
I don’t so much anymore –
I am kind of thankful for that.

Dwyer writes of one of the sessions, " The atmosphere at can be quite chaotic as was this visit. It made it hard at times to talk above the volume. I was nervous, unsure of how this session would go and was relieved and greatly surprised (and pleased) that once I began reading the first poem the whole place hushed and a sense of quiet and peace ensued." 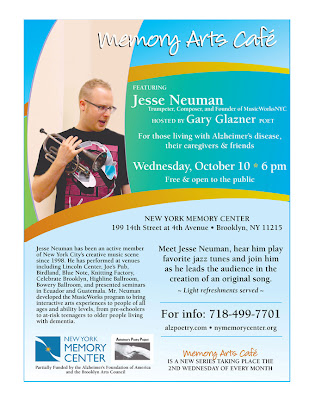 Brooklyn, NY – September 12, 2012 – Memory Arts Café is a new series of free art events for people living with Alzheimer’s disease, their caregivers and the general public and is co-produced by New York Memory Center and the Alzheimer’s Poetry Project.

The series, which takes place on the 2nd Wednesday of each month, includes light refreshments and the opportunity to chat with the guest artists.