Memory Arts Café is a new series of free art events for people living with Alzheimer’s disease, their caregivers and the general public and is co-produced by New York Memory Center and the Alzheimer’s Poetry Project. The series, which takes place on the 2nd Wednesday of each month, includes light refreshments and the opportunity to chat with the guest artists.

This Memory Arts Café event will feature dancer Heidi Latsky in performance and she will lead the audience in the creation of a new dance. Poet Gary Glazner will host the event. 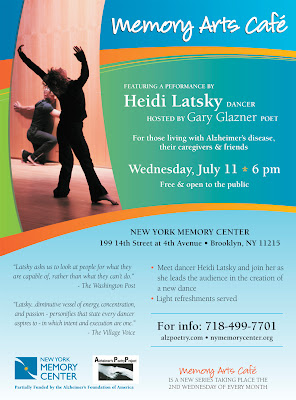 "Latsky asks us to look at people for what they are capable of, rather than what they can't do." - The Washington Post

"Latsky…diminutive vessel of energy, concentration, and passion- personifies that state every dancer aspires to-in which intent and execution are one." -The Village Voice

About the performer: HEIDI LATSKY the Artistic Director of Heidi Latsky Dance has been a moving force in the dance world for many years, as a choreographer for stage, theater and film. Latsky initially received recognition as a celebrated principal dancer for Bill T. Jones/Arnie Zane Dance. In addition to creating more than fifteen works for Heidi Latsky Dance, Latsky has been commissioned to create new work by the Cannes International Dance Festival, American Dance Festival, the Joyce Theater: Altogether Different Festival, Performance Space 122, 92nd Street Y, Alvin Ailey Dance Center, and the Whitney Museum of American Art. Heidi Latsky Dance was a recipient of a 2006 rehearsal residency at the Baryshnikov Arts Center and a residency at the Abrons Arts Center, 2009 where GIMP premiered. Latsky is an innovator in disability arts. Her piece GIMP features four trained dancers and four performers who have physical disabilities. It turns on its head accepted notions of dance, performance and body image. Latsky and company have created a piece of work that is a natural and completely unique vehicle for dialogue, increased understanding and civic engagement.