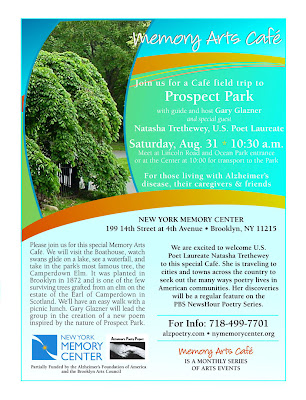 Picnic in the Park


Please join for a Memory Arts Café field trip to Prospect Park. We will visit the Boathouse, watch swans glide on a lake and see a waterfall. We will take in the park’s most famous tree the “Camperdown Elm,” which was planted in Brooklyn in 1872. It’s one of only a few surviving trees in the world grafted from an elm on the estate of the Earl of Camperdown in Scotland.

Poet Gary Glazner will lead the group in the creation of a new poem inspired by the nature of Prospect Park. Yes! It will be an easy walk in the park.

In 2012, Trethewey was named as 19th U.S. Poet Laureate by the Library of Congress. Trethewey plans to travel to cities and towns across the country meeting with the general public to seek out the many ways poetry lives in American communities and report on her discoveries in a regular feature on the PBS NewsHour Poetry Series.