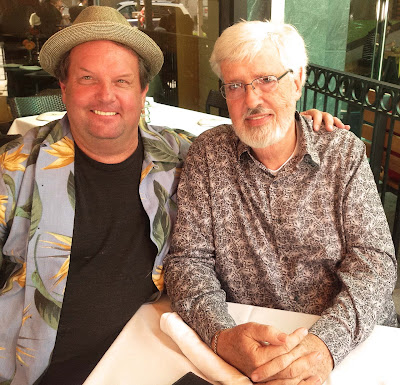 Like so many people I considered Dr. Richard Taylor a friend. Richard died on June 25th, 2015. He was the most passionate and outspoken advocate for people living with memory loss. This treasured photo was taken after he testified at the Dementia Arts on Capitol Hill. The project included an exhibit of people living with memory loss participating in the arts in the The Russell Senate Office Building and a panel briefing, which was sponsored by Senator Tom Udall of New Mexico.

The speakers in addition to Richard and the Senator among others included: Rocco Landesman, Chairman, National Endowment for the Arts; the Guest Poet, Stuart Hall who read poems about living with memory loss; Sunil Iyengar, Director of Research and Analysis, National Endowment for the Arts; Dr. Anne Basting, Executive Director, Center on Age & Community and founder, TimeSlips; Maria Genné, founder, KAIROS ALIVE! and Margery Pabst, Executive Director, Pabst Charitable Foundation for the Arts and author of “Enrich Your Caregiving Journey."

All of them were well spoken and articulate about memory loss and care-giving but it was Richard who brought the issue to life and who made the standing room crowd of Senate staffers and the public laugh and cry. So many of the people who attended the panel briefing on the state of Dementia Arts Research came up after the event and talked about how moving Richard's talk was.

I first met Richard at an Alzheimer's Foundation of America Conference in Dallas in 2006. It was the first time I had attended a conference on Alzheimer's where a person living with memory loss had spoken at the conference. Richard always pushed for including that voice. When I began organizing Dementia Arts on Capitol Hill, it was my great hope he would be able to attend and I organized the event around him.

When I first contacted Richard about speaking at the event, he knew I would need sponsors and he said, "Are you sure you want me? You know I can be considered quite controversial." As Richard predicted, when I was talking with a marketing person for one of the major Alzheimer's advocacy groups, the person asked about the speakers at the event and said, "You know Richard Taylor called me an angel of death." We talked it through and agreed that if we were living with memory loss, we might also have Richard's sense of urgency and frustration, at how most if not all the resources and funds raised around Alzheimer's, are put to use for a distant cure and not towards helping people today.

In the end, the Alzheimer's advocacy group, did help us to promote and get the word out about the event. I believe that although was difficult, that it helped the person to talk out how it felt to be described that way. The conversation was frank and honest and Richard loved hearing the story. I think this person's anger came in part from the guilt of knowing we really don't do enough. I know for myself that when I heard Richard speak, it always pushed me to work harder for people living with memory loss.

Below are a few of the remarks he made that day, shaped into a poem. Like so many people I am missing my friend Richard today, but take heart in his words and send to his family and all his friends thoughts of love.

Hello, My Name is Richard Taylor

It’s not complicated
understanding who I am
once you get past the stigmas.
I am Richard,
a whole human being
living with the disabilities
associated with the symptoms
of Dementia.


Please do not give up on me
when I do not voluntarily
communicate as you.


Assume the best
for me, and in me.
Speak to me
as if I am all here.


It is a moral imperative
to support those who
for no reason
of their own cannot
meet their own needs.


A clean bed, a warm meal,
surroundings that mimic a hotel-
these are the basic needs.


It is the higher level needs
you all best support.


The needs that bring a smile
to my face, a bounce to my step,
and a handshake, a hug, or a kiss
for you when you leave.


Hello, my name is Richard Taylor;
I am a retired psychologist
living with the symptoms
and diagnosis of Dementia,
probably of the Alzheimer’s type.


Why is it everyone
is so amazed when we
dance, sing, and write?
Could it be we have been
hitherto written off as being fully human?


As our symptoms increase
do our needs for happiness,
connectedness, friendship,
self-esteem decrease?
Of course not.


I will be a complete
human being until
about two minutes
after I have drawn
my last breath.