Can you Bake a Cherry Pie Billy Boy? 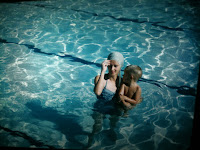 The Alzheimer's Poetry Project has its origins in part through my experience of using poetry in comforting my mother at the end of her life in 1997. This last week having the honor of being able to be at my father's bedside, again gave the chance to recite poetry to a dieing parent. The closing lines of Kubla Khan were especially powerful:

Weave a circle round him thrice,
And close your eyes with holy dread,
For he on honey-dew hath fed,
And drunk the milk of Paradise.

I would sit at the head of my father's bed, softly saying the poem and connecting to him by matching his breathing with the cadence and rhythm of the words.

Below is a section from the opening essay in Sparking Memories: The Alzheimer's Poetry Project Anthology, it includes how my father and I used "Can you Bake a Cherry Pie," to comfort my mother.

Whenever I speak about the APP one question always comes up: “Do you have a family member with Alzheimer’s?” I do not, however I do have a personal connection to using these poems with a loved one. When I first began this project in 1997, my mother was in the last stages of terminal cancer. Through a combination of the drugs she was given to relieve the pain and the progression of the cancer she had grown unable to think and communicate clearly.

One day my father called to ask me to come over as my mother was having a particularly hard time. On arriving, I found her quite agitated. I had with me the poems from the Alzheimer’s program and I began to read to her and soon she was calm. Then my father Billy and I began to recite apoem that she had teased him with when they were childhood sweethearts. My mother quite gently began to say the poem along with us, even laughing as she joined in:

It was one of her last moments of real clarity and a moment of playfulness that quite powerfully brought home to me how these poems could be of use to people.
Posted by Gary Glazner at 12:04 PM