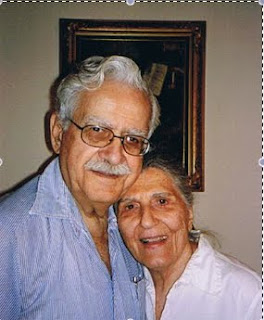 She wakes at eight in her bed with the rail,
She smiles in delight, with nary a wail.
I relish her babytalk, hug her and kiss her,
Changing her diaper, I wash her and dress her.
We kiss and we sing, she gurgles with laughter,
Miss Jolly, spoon-fed, gazes sweetly thereafter.
She teethes CD cases, whate’er’s at arm’s length,
Her joy is contagious -- from where comes her strength?
I drop her at Day Care, and muse to another,
“But I am not childless, I’ve an Alzheimer’s mother.”

The poem "Daughter Love" is written by Lucine Kasbarian for her mother Alice Hamparian Kasbarian. The photograph is of her mother and father Charles Kasbarian.

Writer, book publicist and political cartoonist Lucine Kasbarian is a descendant of survivors of the 1915 Turkish genocide of the Armenians, Assyrians and Greeks, which drove her grandparents from their native lands in Western Armenia (now within the borders of Turkey). She is the author of Armenia: A Rugged Land, an Enduring People (Simon & Schuster) and The Greedy Sparrow: An Armenian Tale (Marshall Cavendish). Her syndicated articles appear in media outlets around the world. Lucine and her husband, writer David Boyajian, live in Massachusetts and New Jersey.
More info on Kasbarian's work here.
Posted by Gary Glazner at 9:25 AM